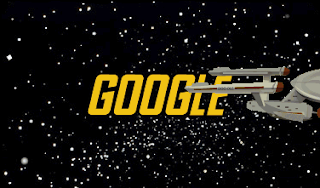 I was greeted with a lovely little interactive Google Doodle this morning on the Google Search site. This is in celebration 46th birthday of the 1st Episode that aired on the 8th of September 1966.

The episode titled "The Man Trap" aired on NBC and kept going for 3 seasons and 79 episodes and got canceled due to low ratings. But the damage was done, planet earth now knew Star Trek and we would want more.
at September 08, 2012
Email ThisBlogThis!Share to TwitterShare to FacebookShare to Pinterest